Customarily there is a day of meditation with the new installation on site.  As it is, I have a few camera pics as sketches to remind me of the room.  And the unwinding, too, these days after installation when I am still redlining but not my body, and not my world.  Plus there is something undone, there is something coming.  It’s already good, I mumble to the empty room. 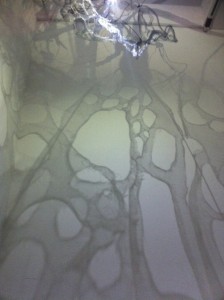 Well, sorry to have to say it, but the work does call scale up for show – which reorganizes our understanding of our size relative to the Universe (lordy mercy can u believe they think they know something) is the world at other scales “our” world, and before you say no, pat that flu shot arm.  Scale wouldn’t exist without analogy.  I’ve heard travelers who’ve been up there say there’s nothing.  no, not even analogy.  Ana- (I’m making this up)-logos without word.

Diviner it tries to tell me a triangle, it says, analogy it says no words it says triangle.

It never fails, so much so that I don’t even have to write with a breathy voice about it, that the least interesting element ends up being the most.  The terminal end of what I had come to refer to as circuit A, the arm that goes from the central mass to the tall pylon-like window, was so very back of the shed door until I added one strip of blue screen, a light, and paint.  It’s that peacock teal glowing mass, the neural center, or astronomical explosion, or fiery trajectory of a cartoon pinball, or maybe it’s giving!  Is it botanical?  Is it?!  is it?!  BABY  I think it’s a flower with sight.

World class badassery!  As of today the work has been called world class badassery.  What more could I want?  In terms of what the work is called.  I would like to install low, comfortable seating in the matrix.  Memory foam in the shape of shallow cups, easy papasans, and some high benches, as well, for those of us who don’t want to get way down close to the ground and then all the way back up again in one afternoon.

Machine!  It takes so much to wow me anymore.  I was ogling the joker in the screen, or maybe it was the fool, page-boy haircut, and arms restrained in tied-off sleeves floating slanted when I saw, ha, ah, machine…. it’s Aristotle turned another way.

My hands… I need to go ice them. 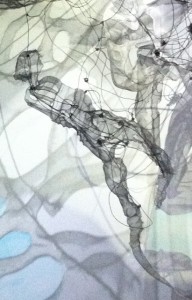