dreaming hardware armature into existence and there it will be one day, curling and flexing maybe cyborg-like (cyborg hardware for the optics?  plain as day – could any of this be predicted?)  or maybe specimen-mount.  Unclear, what to do about the myriad futures.     Which dream leafs out I don’t know… there is the dream of movement, there must be some movement, what is it?  does the optic rotate?  Make statements, ask questions, what moves, what do we see, we see change.  Maybe they are automated, maybe they are motorized and they move unliving, maybe they have joints, tensioned joints like ball joints where they can be set to stay still, that’s dead, that’s spectator-y.

This IS the world, that’s my point the world i am describing IS the one we all live in, so look at the glass, look at what happens, what the photons do.  the photon test. 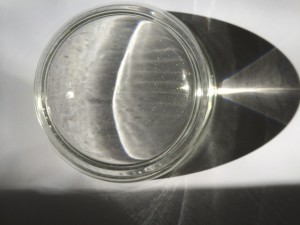 What could be simpler for us?  Put it out in the sunlight. Likely man’s first experiment.  The mount, the presenter, what word I use to say the ‘hardware that holds the optic and the light’, what examples in the history of objectness and especially can we look at the instruments that ushered in the renaissance, the quantum leap in human knowledge and ability/activity – facilitated by communication, facilitated by photons, too, the instrumentation what held two objects, and I think of the astronomical body models, with concentric rings, bands around the globes and what for, that freely spin in either direction, around the globe, what holds two 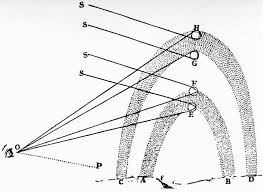 Does not the fact that Newton draws in the eyeball in diagrams hint at perspective being creative? It creates by limiting, limiting like baffling.  I placed my eye to the Hole in the Page.

“Do not these Colours arise from such Motions excited in the bottom of the Eye by the Pressure and Motion of the Finger, as, at other times are excited there by

“And when a Coal of Fire moved nimbly in the circumference of a Circle, makes the whole circumference appear like a circle of Fire; is it not because the Motions excited in the bottom of the Eye by the Rays of Light are of a lasting nature, and continue till the Coal of Fire in going round returns to its former place?”

And then in the next sentence, Newton uses the word ‘lastingness,’ and my hands fly to my face, Newton?

The drawings in Opticks.