Here’s how it happened – I was leaning on my jeweler’s bench staring at the all-cement city outside the studio window, which is the old factory kind, a horizontally hinged panel that opens mostly to the underside like half a sandwich board, and deep in thought, wondering formless like I always do and always will when right before my unblinking eyes, a living flying splotch spiraled into my studio via the underly open window, and continued in a perfect corkscrew arc, something feathery and seemingly black, I was already writing the scene off as a dream, a sunspot, a fever I’m catching, when I heard it land with a foil-sounding scritch, its perfect crescent interrupted by my bench.

I looked to find Grasshopper, in full dry grass colors, its Lurch head way too big, and eyes up too far, like its face got stuck stargazing, or its mother was a mule.  Still, all its parts for sensing the world making perfect sense even if the format is strange, like, six legs, two in each of three different lengths.  perhaps to negotiate the waving fronds.

I could tell it was looking at me from how it didn’t move when I didn’t move, and when I did, it slowly bent its head over the edge of the table.  I saw for the first time that its exoskeleton has articulated panels, the shoulder segment unfolded like a paper puzzle away from the perfectly mated seat of the back-up wings. Grasshopper moved a little, and cleaned its left antenna with one shortest leg like if anyone saw, they’d have to agree the creature had its whole life on its mind.  I greeted it, and thanked it, I mean, here Grasshopper came on a perfect unbroken spiral in the middle of a sea of concrete, four industrial stories high?  And such a showy entrance like Chinese fireworks.

But Grasshopper was slack, tame, and suddenly like a mother knows, I felt the thirst, and put G on the windowsill. I poured a small puddle near its feet.  It lowered its head straight into the puddle almost like a collapse, and drank the whole droplet, and a refill. 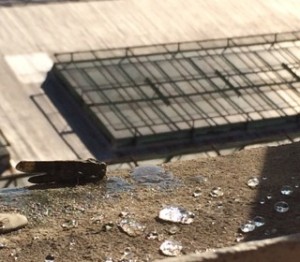 After a period of stillness, it raised, tightened up, took some steps, and together we looked out at the cement and the silver-painted tar roofs of industry. I just looked at Grasshopper, what else could I say? G came such a long, death defying way to flurry buzz into my studio window in a perfect spiraling arc, right when I was saying to myself silently, 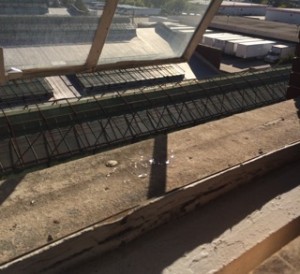