The drawbridge is up over the Chicago river out my studio window. 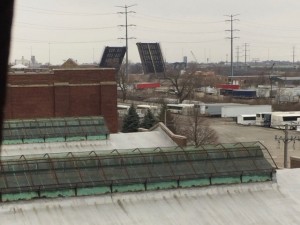 I like the drawbridge for telling it like it is, unhijacked by the internet, up over and out, the human-machine connection, some Bridge Union guy up in the bridge control house atop the enormous criss-crossing scaffold, a corrugated secret club, with only one small square window, don’t think these guys aren’t paid well, with his TV and his space heater, thinking he controls the bridge, when in fact, he is at the service of The Unfolding. how? how? just take a deep breath.

‘that ship has sailed,’  he says to himself, dialing and cranking the levers and pulleys, the go and stop buttons I have to imagine because no one ever gets inside the little bridge house to see, except the Bridge Union people. 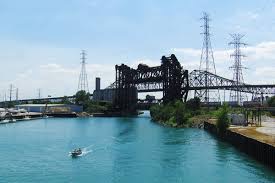 Day of the unexpected.  Here I am all meditation mind, and no lotus. Today’s events placed me at the studio only a half hour before the freight elevator closed for service.  So I couldn’t have a packing meditation, in which I mentally imagine every moment of the installation, packing as I go.  Instead I’ll make this show with items still in boxes from (recent show).

Even though I like packing meditation, the intensity of a cold install, as long as all my tools are present, is good for the work.  I know what style building I’m installing. I know I’m interested in catching  light midair without shrouds or banners or floating ghost costumes. The light catchers have to be indigenous to a history of transparency. I’m not fond of fibers.

As soon as I realized that these thoughts were the packing meditation already begun, I put down the keyboard and went to the floor with my yoga ball, opened the bodysystem, and so begins with a tarot reading on topic of the materials.  The work is not available at walmart, and this is the way it arrives.

The pacing and ringing or playing the pre-recorded Tibetan Crystal bowls, the giant sketch, its log drawn and listed.

I look at the drawing and am reminded, the work is already making itself.   Where to place the lights in space, dependent at first on my vision, my drawing, but once the lights are in, they belong to the building, the site, the birds that might even be flying through.

I had been thinking and seeing about 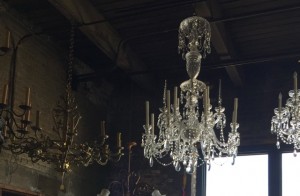 then, on site object became 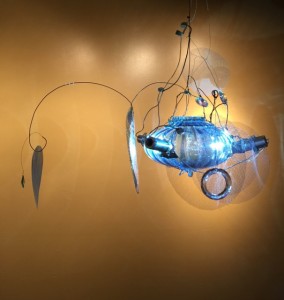 which all by itself creates this environment: 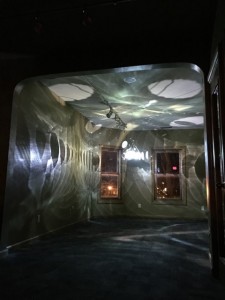 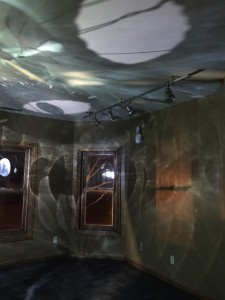 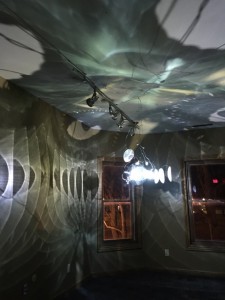 First, I stretched. crinkling crackling ticking. I heard another artist say he rolls out everyday with a tennis ball and a foam roller, as what he says when he introduces himself.  My thought was, way to pass it on, dang.  I admired his immediate and direct effectiveness.

Even though I am not in the mood for three shows in a row, I take it on my cuff shields, because I am beholden to the work.

I need to produce one same-day quick install environment and Seeing setup, and another   for the the very next night. I expect to spend one day on one, and the rest of the time on the other.  It doesn’t care what I expect.

Now is not the time for a deep clean, start-from-zero pack, but merely a one layer repack, with the sketchbook open, placing prepared, glass on the table.

Letting present rather than thinking of it.  Coffee and sugar because I can’t be perfect, for chrissake.  Italian roast and raspberry hard candies with the soft chewy centers, one after the other, cut with the only salty munchie that had not gone rancid or stale in my long, two-season absence. The Ritz Chips from November are pretty much the same.  I think of the anti-aging properties they are imparting to me now as I eat them all up between sugars that have included three Halloween Reese’s Peanut Butter Cups, softened in the excessive heat of my late winter studio. 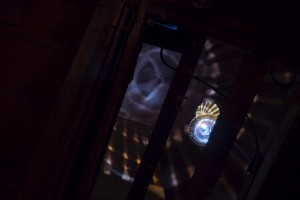 the work leapt out in front of unawares-me today, gleaming and waiting to be described, crystal palace crystal caves.